This facility manufactures lacquer from base materials including Toluene and Acetone. A tank farm of AST’s containing these materials was located approximately 500 feet from the manufacturing building and at a lower elevation. Pumps and underground piping were used to move the materials when needed to the blending area. A failure of the piping near the AST’s caused the release of an unknown quantity of both acetone and toluene at a very shallow depth.

The lithologic setting consists of silty clay to a depth which varies in the source area from 15 to 30 feet overlaying weathered limestone bedrock pinnacles. Two geologic cross sections are attached showing the topography and stratigraphy.

EcoVac’s chief geologist was tasked with selecting the recovery well locations and design based on the data presented on the cross sections which was obtained from a previous geoprobe investigation.  EcoVac used a combination of well testing with EFR® and vapor extraction and incineration with a specially designed Dual Internal Combustion Engine (DICE) to remediate soil and groundwater impacted by the solvent release.  EcoVac also directed the facility manager to pave the area where the release occurred to stop infiltration of runoff water into the vadose zone causing migration of contaminants, and also to reduce the potential for short circuiting during the vapor extraction and EFR® remedial actions.

Starting in June 2008 EcoVac performed 19 EFR® tests and extractions and then began continuous extraction with the DICE unit in November 2008 which continued through May 2009. During this period a calculated 5,627 gallons of solvent were recovered from the subsurface. Liquids were disposed of and vapors were incinerated in the DICE unit on site. A picture of the work area and DICE unit operation is attached. 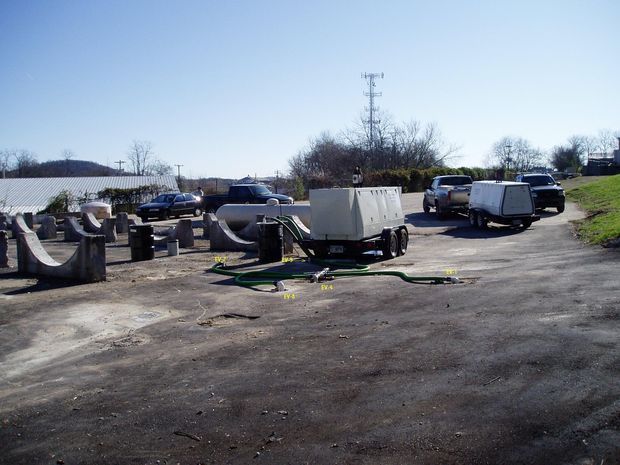